One of the aspects in which Francis has caused most perplexity – especially in the western world – is his blatant aversion to capitalism, shown by criticizing the free market whenever he gets a chance, by his unconcealed partiality for a motley assortment of communist leaders, as well as by the transmission of messages of dubious content, which – if one has the heart to get to the bottom of them – contain unpleasant surprises.

One of the members of the Denzinger-Bergoglio network, a passionate theologian of the Social Doctrine of the Church just finished a study showing some surprising aspects of the Encyclical Laudato Si’ regarding private property. In observing the conclusions reached, at first we thought that he might be exaggerating, perhaps stimulated by a motivation far removed from the objectives of this page. However, in calmly examining his point of departure, basis, analysis and conclusions, we could not help but admire it, for our reader had pinpointed everything very well indeed… better than Francis himself in his controversial encyclical. So let’s get right to the matter at hand, part by part…

Laborem exercens, source of inspiration (with nuances) for Francis

Francis begins Chapter 4 of the Laudato si’ with an eloquent subtitle; ‘The Common destination of goods’ and he further wrote in number 93:

‘The principle of the subordination of private property to the universal destination of goods, and thus the right of everyone to their use, is a ‘golden rule’ of social conduct and ‘the first principle of the whole ethical and social order’ (John Paul II. Encyclical Laborem excercens, no. 19, September 14, 1981). (Laudato Si, 93)

In this paragraph, Francis cites the encyclical Laborem excercens of Pope John Paul II twice. Yes, that’s right, twice. Because the first reference: ‘The principle of the subordination of private property to the universal destination of goods’ corresponds to a paraphrase of number 14, a fact that is not mentioned. The second reference, as is indicated in the text, has been cited from number 19.

Now, these two references, having been extracted and juxtaposed outside of their original context used by Pope John Paul II, transmit imprecise ideas to most people, and they may even provide a basis for sophisms. Let us examine one of them, which is a serious matter.

If on one hand it may be affirmed that private property is subordinate to a universal right – that is, to the right of all men to make use of goods; and if, on the other hand, it is also affirmed that this right is a ‘golden rule of social conduct’ and ‘the first principle of the whole ethical and social order’, then, one could say that private property, being ‘subordinate’ to this ‘universal right’, should not necessarily be for individual use. Therefore, private property, in conceding its ‘private character’, in order to become ‘communitarian’ or ‘collective’, would fulfill more entirely its ‘universal destination’. Is it not due to this collectivization that it would be possible to alleviate its poorer brothers who have no possessions? This all sounds very well, doesn’t it?. But it is a mere sophism… as we shall see.

This gains strength when we read the second paraphrase that Francis subsequently presents. In it, once again the source of inspiration is omitted (Laborem excercens, no. 14) and besides, the doctrinal principle presented by its author, Pope John Paul II, is overlooked:

‘The Christian tradition has never recognized the right to private property as absolute or inviolable, and has stressed the social purpose of all forms of private property’ (Laudato Si’ 93).

The reading of these three references obtained from the Laborem excercens, a direct citation from number 19, the two paraphrases of number 14 (moreover, from the same paragraph), together with the omission in indicating the author of the ideas [Note 1 – below] and the doctrinal context in which they are presented, oblige us to enter into an extensive clarification of the principles that Pope John Paul II taught, based on the Social Doctrine of the Church.

In light of these ‘lapses’ – let us denominate them in this manner….– a first point to clarify would be: In what doctrinal context did Pope John Paul II write these three references of the Laborem excercens, which are used within the Laudato si’ with such a surprising interpretation? What did this Pontiff teach regarding the right to private property in the referred number 14 of his encyclical Laborem excercens?

Reading the Laborem exercens in its context…

For the purpose of this analysis, the doctrinal aspects that Pope John Paul II recalled in number 14 of his encyclical Laborem exercens regarding the right to private property, may be synthesized in five points.

The great difference between the words of Pope John Paul II and Francis, are found in the following important doctrinal aspect: When Pope John Paul II addressed these topics he referred to the right that all people possess to use the goods created by God. In effect, the earth was given as an inheritance to all humans so that they might live from it. The economic liberalism of the 19th century, in denying workers a ‘just salary’, in practice disallowed them the possibility to form a patrimony for themselves and their family:

‘Christian tradition has never upheld this right as absolute and untouchable. On the contrary, it has always understood this right within the broader context of the right common to all to use the goods of the whole of creation: the right to private property is subordinated to the right to common use, to the fact that goods are meant for everyone’ (John Paul II. Laborem Exercens, no. 14)

Incidentally, exactly this universal right, whether of the large, medium or smaller property owners, to use the goods of the earth, was the favorite target of the persecution of the ‘programme of collectivism as proclaimed by Marxism’ and brought about in numerous countries for decades, as Pope John Paul II himself emphasized in the same number 14 of the Laborem exercens, cited above.

That which the Polish pope strove to emphasize, Francis, on his part, by paraphrasing these ideas from the Laborem exercens, disregarding the historical contexts in which they were presented, and omitting a mention of its author and the doctrinal principles to which he alludes, inevitably presents paragraphs outside their original context. To facilitate its analyses, it is worthwhile to cite the second part, once again:

‘The Christian tradition has never recognized the right to private property as absolute or inviolable, and has stressed the social purpose of all forms of private property’ (Laudato Si, no. 93).

Francis once again provokes doctrinal confusions, by presenting this paragraph with ideas as though they were of his own authorship, affirming that private property is not an ‘absolute’ or ‘inviolable’ right, and moreover, that a ‘social function’ weighs over it in any of its forms.

Francis and the ‘de-absolutization’ of private property?

What does it mean that this right (to property) was never recognized by ‘Christian tradition’ as absolute or inviolable?

We obtain a response by considering the historic and doctrinal circumstances exposed by Pope John Paul II in the Laborem Excercens, no. 14: ‘Within the broader context of the right common to all to use the goods of the whole of creation: the right to private property is subordinated to the right to common use, to the fact that goods are meant for everyone’. However, since in Laudato si’ Francis argues that private property was simply not recognized by ‘Christian tradition’ as an ‘absolute’ and ‘inviolable’ right, inevitably, some doubts arise:

The affirmation presented in Laudato si’, having been written based on a paragraph that was taken out of context, and above all, having silenced the doctrinal foundation presented by its original author, does not offer to the reader a response to these questions.

Nonetheless, taking as a reference some surprising contributions that Francis has made to the Social Doctrine of the Church, which he proudly declares that he follows, some conjectures may be made regarding his innovative doctrine. Let us examine five:

These are questions that don’t seem so farfetched, when we start putting together this confusing puzzle. But along with these concerns, there is another, just as perplexing:

The ‘social purpose of property’ according to Francis…

What are we to understand when Francis affirms that: ‘The Christian tradition (…) has stressed the social purpose of all forms of private property’ (Laudato si’, no. 93)?

Since according to Laudato si’, private property is a right which ‘Christian tradition has never recognized (…) as absolute or inviolable’, how are we to understand this ‘social purpose’? Would this ‘social purpose’ consist of a redistribution of the goods from those who have possessions with those who do not? If so, how would this redistribution be carried out if the owners do not wish to share their goods, since they are ‘standing up to an idolatrous system which excludes, debases and kills’? Should they be ‘liberated’ by ‘violating’ and ‘de-absolutizing’ their property by means of demonstrations or agitating the masses as is normally done by certain ‘popular movements’, directed by close friends of Francis, such as Juan Grabois of the ‘Workers Confederation of Popular Economy’ in Argentina and João Pedro Stédile of the ‘Landless Workers Movement’ in Brazil?

Juan Grabois – agitator with communist affiliations, promoter of the manifestations in the peripheries and industrial districts of Buenos Aires – great friend of Francis. 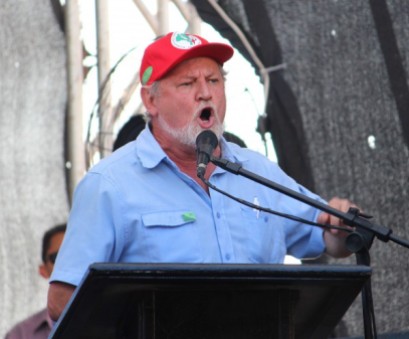 Or could it be that the social purpose of property consists in it passing from its individual condition to a communitarian state through the governmental action of those leaders who have manifested a special ‘understanding’ toward Francis and vice versa, such as Evo Morales, Nicolás Maduro, Rafael Correa, Raúl Castro and other such representatives of socialism?

This ‘social purpose’ in Laudato si’ is also not explained by Francis. Nonetheless, those who wish to examine the innovative vision contributed to the Magisterium of the Church with regard to private property, can read the addresses that he made to the Popular Movements (Rome, October 28, 2014/ Santa Cruz de la Sierra, July 9, 2015), which were the object of analysis of the Denzinger-Bergoglio (here and here). Let each one draw his own conclusions…

Having attempted to clarify these preliminary doctrinal aspects taught by Pope John Paul II regarding the right to Private Property, we invite you to the study of the other sections, which are no less important, regarding the reference that Francis made to his illustrious predecessor when he spoke of the “the common destination of goods”. Don’t miss the other parts of this series, for they bring many surprises…

Note 1: In accordance with a study presented by the Stanford University of California, plagiarism includes much more than just copying someone’s work. Though it may be unintentional, quoting, paraphrasing or adapting material, and presenting someone else’s idea, opinion, or theory as your own, are all examples of plagiarism.