One of our collaborators received a letter, through a friend, from an individual who we are unacquainted with at this point. In it, he manifests deep sadness in seeing the work undertaken by the Denzinger-Bergoglio. We didn’t know what to tell him in response, but we do wish to share the most significant passages of his missive with our readers.

I am Venezuelan. I have had the opportunity to visit various Latin American countries where my family and I could recuperate that which I believe we will never find again in my beloved nation. In this way, I have met many compatriots and other people who have introduced me to the work you do: amazing, and valuable in view of its seriousness and documentation. But I am saddened to see that it is being carried out, because the truth is that I would have desired exactly the contrary. I speak for myself and for acquaintances who are of the same mind. Allow me to confess that we feel betrayed by the current Pope. Who? We Latin-Americans who thought we should rejoice when the entire world celebrated the first Pope from our continent.

They are Cubans who are appalled to see Raúl Castro act as host to the Pope, who had tossed a flower wreath to the refugees who died in the seas surrounding Lampedusa island, but who, they now perceive, will never do the same for the Cuban refugees seeking protection on the foreign coasts nearest their country. It is we Venezuelans who, like them, have no right to a word of comfort amid the terrible and massive destruction of a country which was once wealthy, but which was sold to Cuba by a regime that, like all communist regimes, only knows how to implant misery, persecution, pain and fraternal hatred. We have no right to feel like refugees, because, as can be seen, Francis’ heart only has a soft spot for communists.

At the end of the meeting with the Patriarch of Moscow, he signed a joint declaration with him; the 17th item reads: “We cannot remain indifferent to the destinies of millions of immigrants and refugees knocking on the doors of wealthy nations.” What cruel irony! Do they, perhaps, expect us to take refuge in countries which, as our own, currently live in the most evident poverty, which, in the previous century, had been coveted sites of attraction to great foreign capitals?

I even have utmost difficulty in expressing to you my displeasure at seeing our Pope seated beside a religious leader who claims to share goals with President Putin, chief of state of the Russia that we could, in a certain sense, compare to our own countries: places where only the pre-communist vestiges bespeak prosperity. Because Russian Soviet communism was unable to build something as lovely as the Kremlin Palace, the present Hermitage Museum or the sumptuous Moscow Metro stations, but only applied themselves to building Gulags for those opposed to the regime. Regarding our Latin-American Holy Father, it could go unnoticed that he shows little interest in relation to the martyrdom suffered by those who shed their blood in opposing the totalitarian and anti-Christian Soviet Regime, many of whom were shepherds of the Catholic Church. But for him to ignore us, who have the same roots in America, obliged to conform ourselves with the wasting of the entire future of our nations, surrendered into the hands of rulers who are, at the very least, incapable of producing anything but misery and persecution!… Why does he send a blessed rosary to a criminal like Milagro Sala1, while at the same time he failed to offer the slightest gesture of kindness, in his latest trips, toward the island’s countless political prisoners, many of whom are held for being Catholics?

I am sorry; this is something that he cannot ignore. Now, among the religious leaders was Raúl Castro, who the Pope referred to with these words: “I am grateful for his active availability; if it continues this way, Cuba will be the ‘capital of unity.’” Of what unity? Of the communist dream of Marx, Lenin and Stalin? Of the ration cards? Of the countless nightmares of all the exiles and refugees in foreign lands who have no right to lament or complain because they flee from persecuting systems toward which Francis never ceases, for one instant, to manifest consideration? I’m sorry, but I can tell you that the Cuban meeting was a deep stab for many exiles like myself. I hope it is understood that these are hearts who saw, in the Pope, the born leader of all who seek protection and justice. Pardon me if my words seem harsh, but the reality we must face is a harsh one, and we don’t know who to turn to, so that our countries may cease being prisons for the opposition and return to being what they once were, in spite of everything: countries where liberty existed.

Note of the Denzinger-Bergoglio

1This topic is stirring polemics in Argentina. According to the Buenas Aires Herald, “Túpac Amaru leader Milagro Sala received an important endorsement that could favour her legal situation after it was revealed that Pope Francis sent a blessed rosary to the activist who has been in jail for almost two months in Jujuy province. The message was allegedly conveyed by the pontiff before he embarked on his trip to Mexico, when he asked Scholas Ocurrentes headmaster, Enrique Palmeyro, to take the blessed rosary to Sala. ‘He (Palmeyro) told us that Pope Francis was very worried about her arrest and is working for her release,’ Tupac Amaru coordinator Alejandro ‘Coco’ Garfagnini told daily Pagina/12 yesterday.”

In a private audience with Francis, June 7, 2014. ‘The Pope committed himself to helping us. And he told us to help him rebuild the world.’ (Tiempo Argentino, June 8, 2014)

Lombardi affirmed that he could not furnish ‘precise and competent answers.’ But Enrique Palmeyro, director of the Scholas Ocurrentes educational network, created by Francis said: “I told Pope Francis about Milagro Sala’s situation and he gave me the blessed rosary for Milagro,” The leader of the Túpac Amaru neighborhood association, was detained a month ago, accused of fraud against the State, illicit association and extortion. 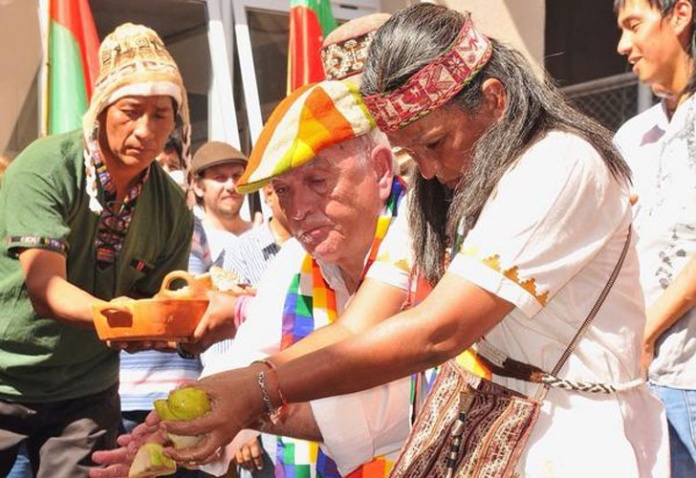 The leader of the political Túpac Amaru neighborhood association paying tribute to “Mother Earth.” “I am Christian in my own way; I believe in spirituality, I believe in ceremonies, I believe in the traditions of our grandparents. That is why, I repeat, politics should not be mixed in with our beliefs” (La Nación, February 15, 2016).

Sending a rosary to someone who is not even a Catholic is nothing but a token of support intended for the media. We comprehend the disquiet this caused our Venezuelan friend, as well as so many others around the world, who do not see Francis supporting the political prisoners of socialist regimes such as Cuba and Venezuela. Would he send a rosary to Leopoldo López, for example?

The list of Francis’ supports to the leaders of popular movements – often self-declared socialists and communists – is a long one, and can be perused in an important study of the Denzinger-Bergoglio (here).

A letter that dispenses commentaries… worth pondering was last modified: June 17th, 2016 by EN - Denzinger Bergoglio

5 thoughts on “A letter that dispenses commentaries… worth pondering”