“Pink” in today’s culture means and insinuates many things… In France it also refers to socialism. These “Pink Fishes” comprise a recently formed leftist political group which openly declared, in the letter requesting the audience, their desire to be “confirmed in their activity” (La Croix, February 16, 2016).

What is shocking – that is, if anything can still shock us at this point – is that Francis wished to strengthen them with a show of support that was unmistakable and very ostensive…in a word scandalous. Thirty minutes was the massive time relegated for the reception of this group, but the audience dragged on for an hour and a half; triple the allotted time. On the other hand, for Mauricio Macri, the democratically elected president of Francis’ homeland: an icy 22-minute encounter that was described in the headlines in these words “International media highlight ‘icy’ Pope-Macri encounter” (Buenos Aires Herald, February 27, 2016)

This “Pink Fishes” movement affirms that it is ‘socialist and papist’, but not Catholic (La Croix, February 16, 2016). Would this business of being papists be because of Francis, or would it apply to other popes such as Pius XII, John Paul II, Benedict XVI, or future popes as well? That remains to be seen… 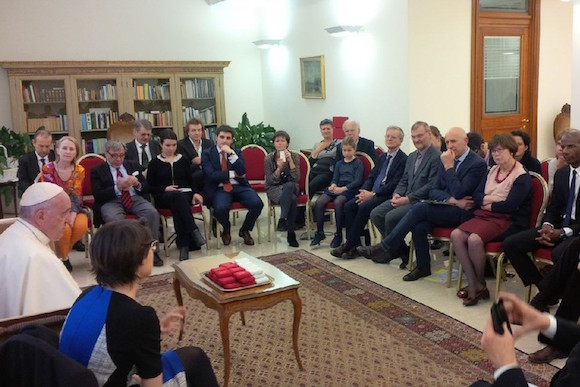 According to the declaration of the directors of the ‘The Pink Fishes” to the press, Francis told them: ‘I am happy about this encounter, for you bring me fresh air’ (Zenit, March 2, 2016). What is this pink–colored fresh air? What is hiding under these fishes’ scales? 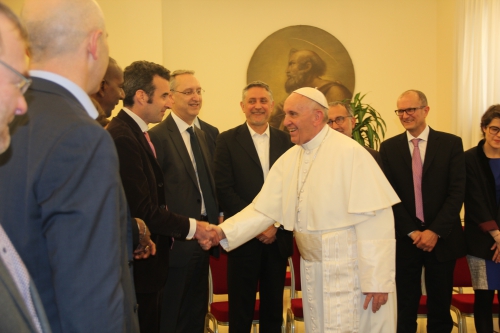 According to the official program of this new little group, every adopted child should preferably be adopted by a family made up of a man and a woman; which is to say they do not entirely rule out the possibility of adoptions by couples in common-law relationships. But the founder, Philippe de Roux believes that ‘homosexual persons are a richness for all’, and according to him, the problems of sexual deviations should be resolved by avoiding religious arguments: “Il faut sortir ce débat du terrain religieux où il n’a rien à faire” (Direct Matin, September 11, 2012).

The ideas of these ‘Fishes’ are far from the teachings of the Catechism, according to which:

Perhaps Francis, with his proverbial poor memory, ‘does not recall’ what the Magisterium declares about sexuality. To aid him in his ministry, we invite him to access the link to one of our studies on the topic:
http://en.denzingerbergoglio.com/who-am-i-to-judge-religion-has-the-right-to-express-its-opinion-in-the-service-of-the-people-but-god-in-creation-has-set-us-free-it-is-not-possible-to-interfere-spiritually-in-the-life-of-a-person/

3 thoughts on “Francis with ‘The Pink Fishes’”