Given the current situation of turmoil in the Vatican, it is not unusual that all kinds of rumors are circulating about Benedict XVI.

What is happening with the elderly pontiff at this moment? On May 16 a Tweet was divulged through a false Twitter account attributed to Cardinal Pietro Parolin, claiming that he had just died. The news was promptly denied and the false account deleted. It is not the first time that this has happened, for the same news had already been spread on January 29, through a false account of Cardinal Bertone, while on March 31 the news was repeated through another false account accredited to Cardinal Jean-Louis Tauran, a week after Lombardi had explained the existence of a new tomb in the Vatican grottos: “It is the tomb of the next deceased Pope.” 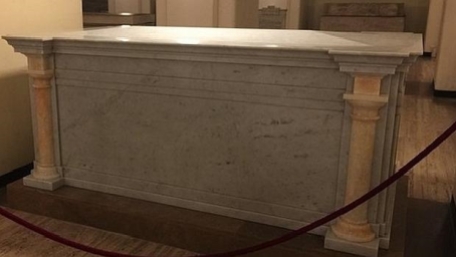 The empty tomb waiting in the Vatican grottos

From our contacts, we have been receiving the strangest rumors …which we dare not publish yet, for at first glance they appear to be fiction…fiction that will perhaps be surpassed by reality.

In any event, the age of the Pope emeritus and recent photos really tend to raise speculation. But there are even stranger facts. Why bring up the topic of the apparitions of Fatima now? Wasn’t this a closed case? We are surprised by this declaration from the Vatican:

Communiqué on articles regarding the “Third Secret of Fatima”

Several articles have appeared recently, including declarations attributed to Professor Ingo Dollinger according to which Cardinal Ratzinger, after the publication of the Third Secret of Fatima (which took place in June 2000), had confided to him that the publication was not complete.

In this regard, Pope emeritus Benedict XVI declares “never to have spoken with Professor Dollinger about Fatima”, clearly affirming that the remarks attributed to Professor Dollinger on the matter “are pure inventions, absolutely untrue”, and he confirms decisively that “the publication of the Third Secret of Fatima is complete”.

What kind of authority does this Professor Dollinger have to deserve such a refutation? Why does the communiqué speak of declarations attributed to him in the first phrase, but then afterward points out that Benedict XVI had never spoken with him about the topic, to once again speak of attributed phrases? So, were the declarations real with a false content, or did they never existed in the first place? Doesn’t it give the impression of communiqué hastily written, for some unknown reason?

But the most peculiar aspect of the case, is that this is the first time Benedict XVI makes an official declaration through the Vatican Press Office, ever since his renunciation — never before had he broken his silence through an official means. And it was done in a very strange way, through a communiqué in which only some of his supposed words are put in quotation marks. If the topic of Fatima is so important to the Vatican…wouldn’t a video of the declarations from Benedict XVI himself have been more appropriate? Doesn’t this have a certain air of excusatio non petita? Will we soon have another surprise regarding Benedict XVI, who has not been seen in public for some time?

While we ponder how to respond to these strange questions, we recall that this pope is one of the most active within Denzinger-Bergoglio. Enter here and see for yourself→

Rumors about Benedict XVI was last modified: May 30th, 2016 by EN - Denzinger Bergoglio

18 thoughts on “Rumors about Benedict XVI”